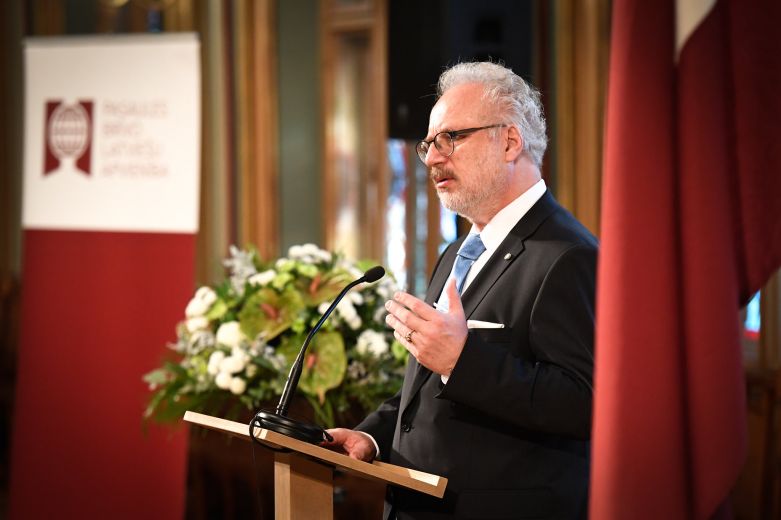 Address of the President of Latvia, Egils Levits, at the opening of the annual board meeting of World Federation of Free Latvians

Thank you for inviting me to open the board meeting of the World Federation of Free Latvians (WFFL) which has been taking place in Riga for many years now.

WFFL was established as the central umbrella organisation for overseas federations of Latvian organisations that represent Latvians who were forced into exile. Let me underline ‘exile’. Exile is a part of Latvian culture and history. It represents those who were forced out of Latvia for some time due to political persecution. While Latvia and its state institutions were immobilised, exiled Latvians were the ones who kept the aspirations and the spirit of liberation alive. Their political activities forced the unwilling West, which was not overly eager to support the restoration of independent Latvia, to stick to the line of non-recognition of Baltic occupation. It is exceptional how the determination and efficiency of this rather small group of Latvians enabled them to continue to be involved in global history and thus ensure the de facto continuity of the Latvian state.

Latvian passports issued by our missions in Washington and London, by the way, were crucial too. Our diplomats who kept those missions open interpreted our constitution and the laws according to their spirit, not the letter. Those of you who want to know more about that should read the 13 May 2010 Constitutional Court ruling which recognises the legitimacy of diplomatic service during the occupation when the state continuity of Latvia had to be ensured. So, I would like to take this opportunity to thank those who held on to Latvian passports back then.

We are often thought of as loners and reluctant to unite in organisations. However, WFFL is a good example of what we can do when feel that real need to.

After the restoration of independence, which was, as I said, to a large extent facilitated by what the WFFL did, the social background of Latvians living abroad changed. And those exile communities transformed into diasporas. Most of Latvians living abroad do not belong to the first or other generations of exile community anymore. Those are people who left independent Latvia for personal reasons. Either to look for a better job, better pay, study, learn or gain new experiences. And it is perfectly normal for a free, democratic country in a globalised world to have some part of its population constantly living abroad. It is not only us. All countries are in the same situation. What sets Latvia apart, though, is the fact that we are a small nation in terms of population. Our population may be small, but our dreams and spirit has always been bold. Therefore, we need to make sure those Latvians who live outside Latvia maintain a strong bond with our homeland and the whole Latvian nation.

The distinction between Latvia and the Latvian nation is made on purpose here. Our country, Latvia, has borders that you can see on the map, with 64,000 square kilometres of land inside those borders. Yet again, Latvian nation has no borders. There are Latvians living all across the world and our nation represented in all places where there is at least one Latvian.

In summer I went to 2×2 camp in Latgale. There were children from countries I would have never though of before as ‘Latvian’: Oman, Qatar, Bahrein and Pakistan. It seems that Latvians are slowly ‘taking over the world’.

It is important for nations to be global and for countries to be ‘local’. However, the bond between the nation and its land is crucial too. States are made by nations and the preamble of our constitution contains expressis verbis confirmation of that. Latvia is the land and the home of Latvians. People, of course, mostly live in Latvia, which, undoubtedly, is important. But they may also choose to spend some time living abroad.

Anyone’s decision or a choice to spend some time living in another country should not necessarily entail the loss or weakening of the bond with one’s nation or state. In this regard, the World Federation of Free Latvians is facing a new challenge of maintaining or helping to maintain the bond. Our nation has transformed, and WFFL needs to transform as well. You were intended as an organisation uniting exile community. Now you must become the central umbrella organisation for diaspora. Transformation is in progress. I am talking about the organisational structure, which you are adjusting right now. Such umbrella bodies are essential and important. We need the umbrella organisations to speak on behalf of their members or those Latvians we used to call the ‘fifth region’. Latvians who reside outside Latvia.

The part of our nation represented by the World Federation of Free Latvians is facing a two-fold task. National identity, the sense of being a Latvian, is not something you are born with. Latvian identity and sense of belonging is a product of upbringing. It forms through the family and, of course, through the surroundings. WFFL has the responsibility for Latvian identity. It must make sure our fellow Latvians, who spend shorter or longer periods living abroad, feel strong connection with Latvian identity, have strong bonds with Latvia and feel as part of the Latvian nation and the state.

I believe that the experience WFFL, I mean, the experience that Latvian diaspora has, and what it does, what WFFL has been so actively doing, is vital for Latvia as well. I mean, there are many questions here in Latvia about how globalised or Euro-integrated world will affect our national identity. For example, 100 years ago, peasants were not concerned with identifying themselves as either French or Latvian, they just were Latvian. Nowadays, you have to be at least slightly concerned about, for example, the use of language. We see Latvian losing its positions in science. Another, politically important issue is whether we in Latvia always use Latvian or switch to another language we are being spoken to. All that affects our national identity.

Latvia needs the World Federation of Free Latvians and other diaspora organisations. They help Latvia preserve its national characteristics and national identity. There is no Latvia without Latvian identity. I think that Latvians who live abroad, for whom national identity is crucial and who think about it a lot, for them these issues are becoming more important. They are becoming more important here in Latvia as well. The bond with your nation is not as self-evident as it were maybe 100 years ago.

At the same time, many Latvians are living in highly developed, industrially developed European, North American countries, Australia and New Zealand. These countries have interesting economic and political history, and democracies. Latvia is, of course, a successful, democratic country governed by the rule of law. However, our democracy has its flaws. I suppose that Latvians who live in these democracies make observations about life there and compare it to Latvia. So, they can see our democratic flaws and can help overcome them.

State of Latvia and the Latvian nation needs to have this kind and maybe even wider, younger and stronger diaspora than it was during the period of exile. It was a sort of alternative way to keep the independence aspirations alive. Lawyers call it acting in the greater good. There is a separate chapter on that in our Civil Law. Acting in the greater good means that we do something on behalf of somebody else because they are not capable of doing it themselves. In past, exile community took over the political leadership because Latvia was occupied and tormented. Some would consider it a burden or troublesome, some say it was categorical imperative, i.e. ‘we had to do it – if exile community would not do it, there would be no Latvia anymore’. Our diaspora no longer has that mission, it has a new mission to help the Latvian nation. As I said, strengthen identity, support Latvia. It is important for our security that Latvians try to apply political influence on the governments of their countries of residence to persuade them to contribute to Latvia’s security, growth and so on.

So, you are faced with many interesting challenges. As I already underlined, it is all about the categorical imperative – the reason you do it. And that, by the way, is a very good, efficient and meaningful example of how civil society should work.

On behalf of the whole Latvia, I thank you for the long years of service to Latvia up until the very moment of restoration of independence and thank you for what you do now and will do in the future. Together we are the Latvians and we are the state of Latvia. I wish you a pleasant and productive board meeting! Thank you!

Tweet
indulis October 14, 2019 Around The World, News Comments Off on Address of the President of Latvia, Egils Levits, at the opening of the annual board meeting of World Federation of Free Latvians
ETTW – A bridge between the EU and the Council of Europe in building a Pan European Diaspora Policy?
Mobility is key – a conference for international HR professionals