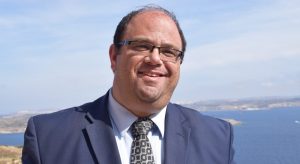 Dr Raymond Xerri, Representing the Council for Maltese Living Abroad – MALTA, Ph.D (Australia), M.A.(Dip.St.)(Malta), D.D.S., E.U.Sch.(E.U.Law)(Germany), B.A.(Hons.)(U.S.A.) was born in New York in 1969 and started his primary education at the St Joseph Catholic School in New York City and after moving to Malta in May 1977 continued such education at il-Qala Primary School on the Island of Gozo, Malta.

In March 1994 Raymond was appointed as First Secretary and Commissioner of Oaths in the Diplomatic Corps of Malta and served his country at the Malta High Commission in Canberra, Australia (July 1995-1998). In 1998 he became Gozo’s first ever Policy Co-ordinator and E.U. Office Co-ordinator at the Ministry of Gozo serving a three-year term till 2001.  Between 2001-2005 he served Malta as Counsellor at the Malta High Commission in London, in the United Kingdom.

In 2002, Raymond Xerri was admitted to the Degree of Doctor of Philosophy at Victoria University, Melbourne, Australia becoming the first student from Malta ever to graduate in Diaspora Studies from any university in the world and the first student of Gozitan or Maltese extract to graduate at doctoral level at the same university.

From 2005 to 2012, Dr Xerri headed the International Office and the Office for Local and Regional Education as part of the Education Department within the Ministry for Gozo. Since December 2012 he was appointed as the first Director of the newly established Directorate for Maltese Living Abroad in the Ministry for Foreign Affairs in Valletta.

In 2015 Dr Xerri was responsible for organising the IV Convention for Maltese Living Abroad.

Between July 2013 and February 2016 he represented the Council for Maltese Living Abroad (CMLA) as one of the Vice-Presidents on the Board of The European Throughout The World (E.T.T.W.) in Brussels, Belgium and in February 2016 became the eight President of ETTW – Europe’s largest non-government organisation represented over 350 million European world-wide.

Dr Raymond Xerri has addressed, chaired and mentored many local, national, continental, regional and international conferences, seminars and gatherings related to politics, diplomacy, international relations, the environment and particularly in the area of Diaspora studies.  He is an author, editor and producer of a number of publications, multimedia and multilingual productions.

He is also a founder, co-founder and active member of a number of Gozitan, Maltese and internationally based organisations.  Dr Xerri was the main organizer of twenty-eight editions of the Gozo International Celebration in Gozo (Malta) with attendance and audience from 51 different countries. He has received numerous international awards and is the initiator and editor of the Series Gozo and the Gozitans.

Dr Raymond Xerri is married to Marlene and has two children, Armando Antonio and Felicity Ann.